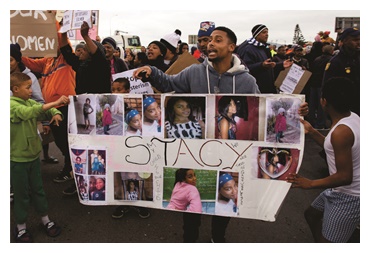 Imagine seeing death even before you are old enough to go to primary school. This is the story of many a child living in gang-ridden areas across South Africa, such as an 11-year-old youth from Hanover Park. "I hid behind a wall. When the noise stopped, we saw a man lying on the pavement. Everybody went to look, so I did too. There was a lot of blood coming from his head. His eyes were this big, just open and staring. 'Die gangsters het hom sat gemaak' (the gangsters killed him) because he was stubborn and acting tough on their turf. He was my friend's brother. I remember his mommy cried a lot after that, ... I don't like guns. They make me scared. When I see the gangsters run, holding it by their sides, I run the other way. I don't want to die. I want to play soccer, finish school and get a job" Petersen (2019c).

Gangs and gang violence are nothing new to South Africa, but in recent years street gangs have been linked to larger and more sophisticated criminal networks. In the South African context, street gangs have a long history dating back to the early 20th century. During the apartheid regime, the Group Areas Act resulted in forceful relocations for the inhabitants of areas such as District Six in Cape Town, resulting in many young men joining street gangs to fight for their territory. Since the demise of apartheid in 1994, gangs have continued to flourish in communities around the country (Wegner et al, 2018). In cities such as Cape Town, Port Elizabeth, Johannesburg and Bloemfontein, street gangs are at the centre of widespread violence and other crimes which negatively influence the lives of many people living in such gang-ridden areas.

Street gangs are no longer characterised by youngsters who hang out on the streets of local communities to “defend” their communities from rival gangsters. They have developed into organised criminal empires where drugs and the enforcement or protection of their drug turfs are key motivators. A turf area provides a market where members sell their drugs, conduct their extortions and commit robberies. The size of a turf area is not necessarily determined in the same way that we understand space. These turf territories can be relatively big and consist of businesses, shops and traffic routes etc within the area. Any member from a gang who tries to conduct business in another gang’s territory will have to suffer the consequences. Gangs and illegal drug trafficking have become synonymous and almost inseparable all over the globe. Although drugs represent the most lucrative economic activity for gangs, they also seek control over a large range of other economic and social activities within their territories. Some gangs invest in nightclubs, shops and garages, and much of this “investment” spending is believed to be aimed at laundering money.

Gang violence is also synonymous with the Cape Flats and yet, this is not the only area where gangs are rife. Westbury in Johannesburg is home to the Varandos, Fast Guns,

Spaldings and Vultures (Hopkins, 2014); Wentworth in Durban is home to the Destroyers gang and the G Section (Rall, 2017); while Gelvandale and Bethelsdorp in Port Elizabeth are the territory of the Up Stand Dogs, Ah Shenes (also known as the Chinas), Dust Lives, Preston Shaw Boys, Kakmakers and Spotbouersand (refer to a related article published in Servamus: June 2016). Hanover Park in Cape Town is home to the Americans, the Ghetto Kids, the Laughing Boys and the Mongrels (Petersen, 2019a) while Bloemfontein is the territory of the Maromas and the BTKs. Since the majority of gang violence occurs in Cape Town on the Cape Flats, this article will mostly focus on that area. SaferSpaces, an online knowledge sharing and networking portal, reminds us that Cape Town is in essence “two cities”. The first is a beautiful place on the slopes of Table Mountain, while the other city is one of the most dangerous cities in the world where police members need bulletproof vests and even back-up from the army. In this latter city, gangs of young men rule with heavy calibre handguns defending the turf for drug lords, dispensing heroin, cocaine, crystal meth, cannabis and fear (www.saferspaces.org.za/understand/entry/gangs-and-youth-insights-from-cape-town).

Gang-related murders in the Western Cape have increased dramatically from 83 during the 2011/2012 financial year to 408 in 2016/2017. The SAPS’s crime statistics for the 2018/2019 financial year showed that 938 of the 1120 gang-related murders in the country were recorded in the Western Cape (SAPS, 2019). Wegner et al (2016) estimate an approximate number of 130 gangs operating in Cape Town with a membership total estimated at 100 000. Van der Linde (2018) claims that one of these gangs, The Americans, has a membership of more than 5000 and further argues that gangs of this size are known as “super-gangs”. Due to their size, infrastructure and influence, such “super-gangs” may start operating as international or transnational syndicates.

Although the main focus of this article is on the Cape Flats, it is important to briefly touch on the Maromas and BTKs of the Free State. It must however be kept in mind that issues such as recruitment and reasons for joining gangs might be similar in all the areas where gangs create havoc and fear.

Relationship between “inside” and “outside” gangs
The street gangs go hand-in-hand with the prison Number gangs (the 26s, 27s and 28s) as the groups inside prisons play an important role in what is happening on the outside. (Refer to the article about prison gangs published from p10 to p17 in this issue of Servamus.) Although the Number gangs are applicable to the prison set-up, street gangs have adopted the same terminology and discipline as the Number gangs. According to Nel (2017), prison and street gangs are growing closer to each other which can contribute towards fuelling the continued flourishing of prison gangs. 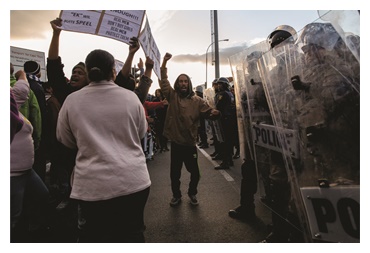 Key to gangs’ survival and the ongoing conflict is the recruitment of young men to do the job. New recruits are attracted to gangs because they offer an alternative to a reality characterised by high unemployment, marginalisation and lack of meaning. Gangs offer access to money, guns and women. Women themselves are increasingly moving into this space, on similarly dysfunctional terms (Shaw and Haysom, 2019). Wegner et al (2016) note that gang members claim that gangs give them access to money which is a tremendous incentive to remain engaged in gang-related activities. They enjoyed getting paid after doing a job as they could buy expensive shoes and jewellery or take money home to their mothers.

Belonging to a gang is a lifestyle that affects all facets of the individual’s life. The gang members are no longer regarded as individuals or “franse” (outsiders) but as “ndoda” (men) who belong to the “kamp” (camp) or “troop”. This is regarded as an honour and a privilege, but it comes with responsibilities and expectations and with a price (Wegner et al, 2016). Pastor Craven Engel, from Ceasefire SA, a gang intervention programme in Hanover Park and Manenberg on the Cape Flats said: “Gangs recruit to strengthen their groups, which gives them more power, more users and more shooters. And when they need to pay debts to other gangs concerning blood, they would sacrifice the latest recruits as buffers” (Cassiem, 2018).

[This is only an extract of an article published in Servamus: February 2020. The rest of the article discusses the issue of children joining gangs; whether alternatives can be provided to youngsters; provide information about the gangs in the Free State; the bloody business of gangs; how communities live in fear but are also protection gangs and concludes with the cost of gang violence. If you are interested in reading the rest of the article send an e-mail to: This email address is being protected from spambots. You need JavaScript enabled to view it. or contact the Servamus office at tel: (012) 345 4660/22 for more information.]