Crime in the SA rail environment: A national disaster?

It is just after 05:00 in a cold, windy and rainy Cape Town when the packed train pulls onto platform three. Commuters rush into the already full train and try to find a place to stand, or if they are lucky, to sit. Others hang out of the open door. The only thing that is important to these commuters, is to get a space on the train with the hope that they will make it to work on time.

Sadly, not every commuter has the same aim or concern about time - these are the thugs who prey on innocent commuters. It happened to a passenger on a train in Soweto that her gold earrings were ripped off her ears as two men were holding a carriage door open when the train was pulling out of Orlando Station. The thugs jumped onto the platform and left their victim bleeding from both ears (Samelane and Nicolson, 2015). This was not an isolated incident and crime is a daily reality for train commuters across the country.

In its 2019 manifesto, South Africa's governing party, the ANC, confirmed the importance of rail services and stated that it will "invest in rail infrastructure to ensure it is safe, reliable and integrated with other modes of public transport. Rail must be the backbone of our public transport system" (Van Damme, 2019). But the sad reality is that a system which is meant to be a workable solution to traffic congestion, has become one of the most troublesome forms of public transport in the country. Thousands of commuters who board the Metrorail trains across six of the country's large cities to get to work, school or university, have endless complaints about the trains and the (lack of) service. As if trains that run late, suspended services and overcrowded, vandalised trains are not enough to deal with, commuters also have to face the risk of becoming a victim of crime in the railway environment.

Role-players in the railway safety environment

There are a number of role-players in the railway safety environment which include: 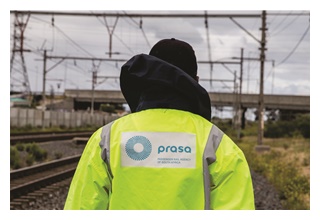 Prior to 1986, the South African Railway Police Force (SARPF) was an independent police force until it was disbanded and its members were transferred to the South African Police (SAP). Although the custodian of policing in the railway environment was the SAP, railway duties were neglected, since their focus had shifted to the high-priority crime areas away from the rail environment.

Madzivhandila (2019) refers to the incident in which Juan van Minnen, who was a final year electronic engineering student at the then Cape Technikon, was attacked and stabbed on 8 June 2001 at approximately 19:00 while he was travelling in a first-class carriage between Fish Hoek and Rondebosch. He died the following day due to his injuries. This case led Cabinet to decide on the implementation of a strategy to combat crime within the rail environment and mainline services, with the objective of rendering a professional crime prevention service in the railway environment in South Africa.

The SAPS Rapid Railway Police Unit (RRPU) was established in 2004 to play a vital role in the railway environment and perform its duties as commanded by the Division Visible Policing. Rapid Rail Police Units are strategically situated in the respective provinces, with the aim of enhancing proactive policing in the railway sector (Madzivhandila, 2019).

In 2013, the Division Visible Policing was tasked to implement the concept of rapid rail policing in the railway environment. The decision entails, among others, the conversion of Metrorail police stations, National Mobile Train Units and the Gautrain Unit into specialised Rapid Rail Police Units (RRPUs). The pilot project started in the Western Cape and was rolled out to Gauteng, the Eastern Cape and KwaZulu-Natal (SAPS, 2017). At present the RRPU covers approximately 33 000 km of rail lines nationally (SAPS, 2019a).

The RRPU is mandated to execute a range of crime prevention duties and the functions of the RRPUs included: 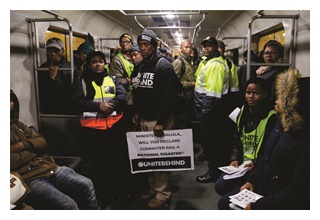 [This is only an extract of an article published in Servamus: January 2020. The rest of the article discusses the challenges the Rapid Rail Unit faces; the crimes within the rail environment; the commuters as victims; attacks on employees; vandalism and infrastructure theft; and the response to railway crime. If you are interested in reading the rest of the article send an e-mail to: This email address is being protected from spambots. You need JavaScript enabled to view it. or contact the Servamus office at tel: (012) 345 4660/22 for more information.] 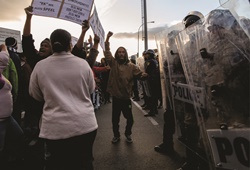 Read More
Imagine seeing death even before you are old enough to go to primary school.
By Kotie Geldenhuys

Read More
When members from the 26 and 28 number gangs engaged in a battle during August 2018, it caused havoc at the Pollsmoor Correctional Centre.
By Kotie Geldenhuys 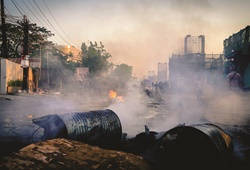 Read More
In a country where there is limited trust in the authorities, many communities welcome vigilante or mob justice groups that promise to stop gang violence and other crime in their areas.
By Kotie Geldenhuys 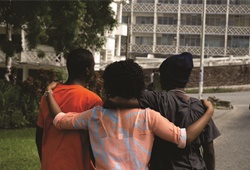 The age of a victim/complainant where such age is a prerequisite for the offence concerned
Read More - Director of Public Prosecutions (DPP), Gauteng Division, Pretoria v Hamisi 2018 (2) SACR 230 (SCA)
Section 51(1), read together with the item “rape” as referred to in Part I of Schedule 2 of the Criminal Law Amendment Act 105 of 1997 (hereinafter referred to as the Minimum Sentences Act)
Conspiracy to commit a crime and/or offence
Read More - S v Smith 2017 (1) SACR 520 (WCC)
Background Section 18 of the Riotous Assemblies Act 17 of 1956* provides as follows:
Ethically bankrupt
Read More - S v Serame 2019 (2) SACR 407 (GJ)
Acting Judge James Grant was presiding in this murder trial before the High Court in Johannesburg.
Public Violence
Read More
In Servamus: January 2019, Pollex, inter alia remarked that “we often hear about all the arrests that are made for the crime of public violence (Afrikaans: ‘openbare geweld’)”.