Congratulations are in order for Lt-Col Marli Strydom from the Northern Cape who was awarded a bronze certificate during the sixth annual National Batho Pele Excellence Awards 2020. The ceremony was held on 30 October 2020 in Boksburg. The awards are regarded as a token of appreciation for government employees who go beyond the call of duty.

Lt-Col Strydom, who is the commander of the Galeshewe Family Violence, Child Protection and Sexual Offences (FCS) Unit in the Northern Cape, was the only nominee from her 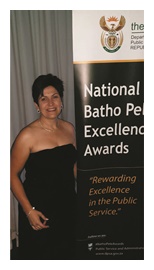 Brig Earl Mills, who nominated Lt-Col Strydom for the awards, noted that she is the perfect candidate for such an award as she is always the one who encourages her team and motivates them to be the best they can be. In addition, she gives swimming lessons to those who are previously disadvantaged in order to try and curb drownings in the community. Some of her colleagues also speak about her exceptional leadership and willingness to do more than what is expected of her.

When Lt-Col Strydom was asked for her comments after she was nominated earlier this year, she said that it was a huge honour for her to be nominated for the award, since it is an event for all government employees in South Africa.

“I thoroughly enjoy my job and it feels as if you have served your purpose if you have assisted only one person. I am very privileged to represent the SAPS,” she said.

These awards are presented in association with Old Mutual, Metropolitan and GEMS who provide financial and material support for these awards.

The provincial management of the SAPS in the Northern Cape is proud of Lt-Col Strydom’s outstanding accomplishment and performance and congratulates and applauds her on her achievement.

[Servamus would like to also extend a word of congratulations to Lt-Col Strydom on her achievement. It warms one’s heart to hear about police members who serve with such passion. We trust that this will serve as an encouragement to her colleagues across the country on what can be achieved if you walk the extra mile. Ed.]