A resolution adopted in 2018, by a group of retired and serving members of the South African Police Service (SAPS) to reach out to needy families, recently benefitted the Tlapu family in Tantanana village outside Phokeng, Rustenburg.

That was after a group of police members known as “1985 TTA Reunion”, identified and visited the family on 13 June 2022, at Tantanana village. The identified household is that of 71-year-old Mrs Chipi Margaret Tlapu, who is blind and who stays with her unemployed 27-year-old last born son. The family has to live from Mrs Tlapu’s SASSA social grant. Their kitchen and front doors were dilapidated. Due to the condition of the door, it became easy for insects and reptiles such as snakes to get into the house while the house’s roof also leaks during rainy days. Thus, the group took it upon themselves to replace both doors, clean around the elderly woman’s house as the long grass was also posing a hazard. The group also sealed the leaking roof and donated groceries, slippers, kitchen utensils, linen and clothes to the elderly woman.

The family members could not hide their appreciation towards the group and good Samaritans for bringing smiles to their faces.

The group members who trained at TTA (Mahikeng) and Hammanskraal in 1985, have already travelled to Christiana, Bloemfontein, Taung and Mahikeng where they reached out to the needy members of the community through their contributions to purchase various useful items.

As part of a journey to reaching out to the needy, the group’s next stop will be in Klerksdorp.

[What a heart-warming story. These are truly police members who continue to serve and protect their community on various levels, and even while some of them are already retired themselves. Thanks for your continued service and for sharing this with Servamus. We trust that your service will serve as an example to young and old. Ed.] 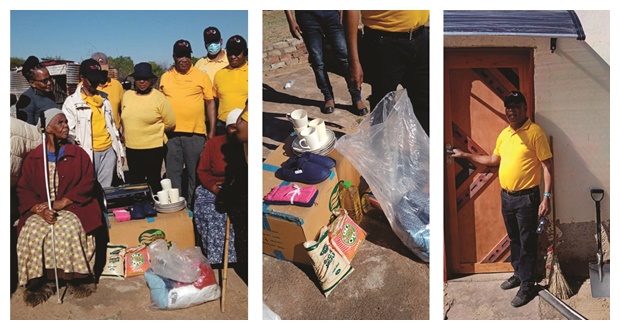