Saturday 14 May 2022 was to be yet another day of search, rescue and recovery operations in the disaster areas of KwaZulu-Natal following the flood devastation a few weeks earlier. Mid-afternoon and mid-rescue, police and dogs came under attack by a swarm of bees in Nongoma, resulting in both humans and animals sustaining many stings.

Most affected were search and rescue dog handler, Sgt Odayer and his dog Dante. While the sergeant was suffering, Dante was going into anaphylactic shock and needed urgent help.

A quick sprint by helicopter to the Westville Vet Hospital, which was the nearest treatment facility, seemed to be the quickest solution. The kind assistance from the Durban Metro Police to ensure that the M13 was closed for a couple of minutes for an emergency landing resulted in the handler and his dog being able to “hop” across the road to the vet for urgent treatment. Both handler and dog were recovering well at the time of going to print and all concerned thanked the public for all their messages. 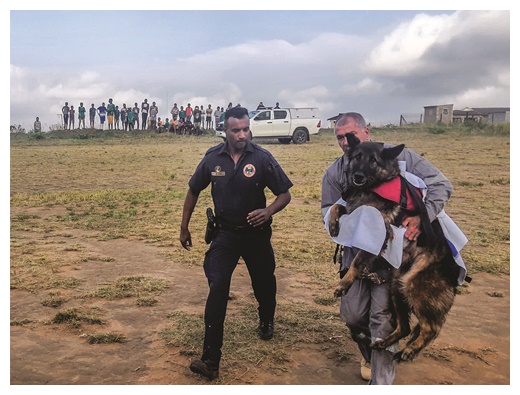