My chains are gone
I've been set free
My God, my Saviour has ransomed me
And like a flood, His mercy rains
Unending love, Amazing Grace

Maj-Gen Tertius Geldenhuys was a policeman's general. His mere presence demanded respect. From his highly knowledgeable pen came acts such as the amendment to the Police Act to enable the establishment of Metro Police Services. He guided the Johannesburg Metro Police, Tshwane Metro Police, Ekurhuleni Metro Police, Cape Town Metro Police and Swartland Municipal Police into existence with the patience of a loving father and mentor. And we tested his patience … which he often answered with his trademark "nice try".

If you did not have him explain the law of evidence to you on a single sheet of paper scrawled down in a hand, firmly holding a cigarette and cup of coffee, you have missed out. He made sure that all the metro police chiefs and their top management were trained to the national standard.

He was patient, extremely straight-forward, understood the operational policing environment and the day-to-day operational problems and questions with which police members on the ground battle. He had worked at station level and therefore spoke the language police officials understood. He held a Doctorate in Law and made significant contributions to several pieces of legislation as noted earlier.

But he was also a people's person who made time for everybody. He was proud of his family and often spoke of them lovingly. He was a devoted Christian and lived his Christian beliefs which was evident in the way he served people with integrity and honour in his daily life.
To many of us he was a friend and a father, a mentor and protector. To many of us he was a lifesaver who was always ready with advice and love.

I will forever miss his bear hugs, deep laugh, the smell of tobacco and guidance to make me a better person.

End of watch! To protect and serve was his commitment. And he did no less. To honour him and keep him and his family in our hearts, thoughts and prayers at this time is not only our obligation, but an honour and a privilege. As a society, we are greatly diminished by his passing. And we must all step up to fill that horrible gap left by his absence.

You can stand down General Geldenhuys. You served us well. We will take it from here ... Fair winds and calm seas! See you in heaven. 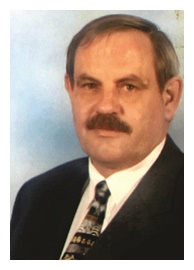