When police members turn 60, they are legally obliged to go on pension. Yet, that does not mean that they are "old". In fact, for many police members it is the official start of a second career as they want to continue to serve the country in some capacity, and continue to share what they have learned over decades-long careers.

Asst-Comm Willie Ngobeni, or "Oom Willie" as we all affectionately call him, still serves as a board member of SARP Publishers, the publishers of Servamus Safety and Security Magazine - the oldest board member yet. In August 2021, during our first "in person" board meeting after the recent lockdown, the board members took the opportunity to congratulate Oom Willie on his milestone birthday. During his years in official service to the country, Comm Ngobeni was a detective and calls himself "the father" of detectives who wants to continue to contribute to ensure "effective detectives" - a project he established years ago. He also has a love for choir music, which is one of the reasons why he conceived the idea of the Police Music and Cultural Association (Polmusca) years ago, to play a role in the amalgamation of the police agencies through the universal language of music. Asst-Comm Ngobeni was appointed as the first president of Polmusca in 2000.

Oom Willie believes that the recipe for a good life (and his 80 years) and happy marriage (he and Ounooi Thembi have been married for 55 years already) includes good food, regular exercising, no alcohol, a positive mindset and the grace of God.

Brig Dirk Lambrechts, alias Pollex, has been the author and compiler of the Pollex legal column since 1986, while the Ask Pollex legal column was added in June 2005. Not everyone knows that Brig Lambrechts's "claim to fame" is that he had been attached to the detective branch for the majority of his police career; that he holds a BIuris degree (Unisa) as well as a Diploma in Police Administration (National Education Department). In the last six years before he retired from the police, he was the National Commander of the Diamond and Gold Branch. Thereafter he was the Divisional Security Manager: Gold Division of Anglo American Corporation whereafter he was employed as a research consultant for the Institute for Criminological Sciences at UNISA. At that time, he was actively involved in the presentation of a security management and white-collar crime investigation course. As the author of various legal books, study guides, legal articles and discussions, Servamus and its subscribers have been privileged to have had this legal eagle as part of our team.

Congratulations to these two role-models, Brig Dirk Lambrechts on celebrating his 85th birthday and Asst-Comm Willie Ngobeni on celebrating his 80th birthday this year. You are the real epitome of what Servamus means, namely "to serve". May you both be blessed with many more happy and healthy years as servants to our country and Servamus. Salute! 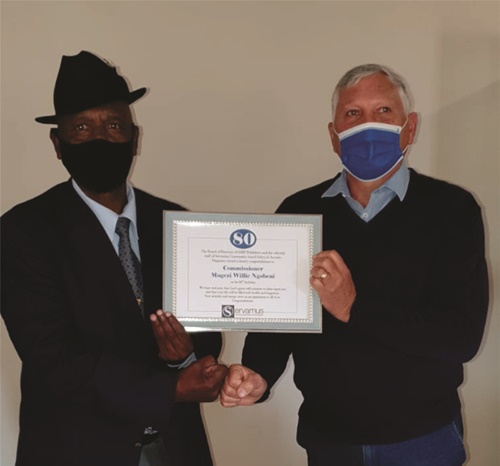