The use of less-lethal weapons in law enforcement 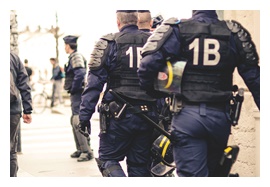 The use of excessive force by law enforcers across the world is not uncommon. In South Africa, the Marikana incident during which 34 miners died at the hands of members of the South African Police Service in August 2012, to this day, raises more questions than answers about the use of force by the police. In the USA, police violence is one of the leading causes of death among young men, with one in every 1000 black men who can be expected to be killed by the police. And their risk of being killed peaks between the ages of 20 and 35 years (Edwards, Lee and Esposito, 2019). According to the Independent Police Investigative Directorate, death in custody has increased for the first six months of the 2020/2021 report year, where 205 people have died as a result of police action, of whom 115 died in police custody (RSG, 2020).

According to the United Nations’ Code of Conduct for Law Enforcement Officials, “law enforcement officials may use force only when strictly necessary and to the extent required for the performance of their duty” (United Nations, 1979). However, they often have to determine, in a matter of seconds, whether force is necessary in a particular situation and, if so, exactly how much is proportional to the threat they face.

Police officials on patrol were traditionally armed only with a service firearm and a baton. However, since the mid-20th century, law enforcement agencies have provided their officials with a range of personal protective equipment and less-lethal weapons to be used in circumstances of civil disturbance, to disperse riots or to incapacitate individual rioters, or in hostage rescue or other police operations. Less-lethal weapons (LLWs) are weapons that have a lower risk of causing death or serious injury. The UK's College of Policing defines LLWs as: “Weapon systems designed to be used by law enforcement directly against an individual or group of individuals to achieve a physical effect in order to mitigate a threat, without substantial risk to the subject of permanent or serious injury, or death” (College of Policing, 2020). The United Nations’ definition of less-than-lethal weapons is even more comprehensive: “Weapons that are explicitly designed and primarily employed so as to incapacitate personnel or materiel while minimising fatalities, permanent injury to personnel and undesired damage to property and the environment” (United Nations, 2015).

LLWs are important to reduce reliance on methods that are capable of causing death or serious injury. The United Nations has therefore called on all governments and law 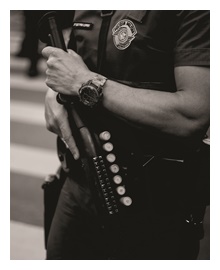 enforcement agencies to develop and equip law enforcement officials with non-lethal incapacitating weapons that would allow for a differentiated use of force in appropriate situations (United Nations, 1990). In crowd management situations they must also comply with regional and international human rights standards (African Commission on Human and Peoples' Rights, 2017).

A 2010 study in the USA found that between 15 and 20% of arrests involve the use of force. Their analysis of more than 24 000 use of force cases showed that the injuries of suspects substantially decreased when LLWs were used (Smith, 2010) (Bulman, 2011). In another review of data collected over a nine-year period (2005 to 2013) in the United States of America of 33 police force events that involved the use of LLWs, only one event resulted in a moderate injury requiring hospital admission (Beatty, 2020). LLWs are also used extensively by the South African Police Service, Public Order Police (POP) Unit, prison warders and others.

(This is only an extract of an article published in Servamus: December 2020. The rest of the article looks at the different types of less-lethal weapons; how these types of weapons help to minimise the risk of injury and death; and the application and technological developments. If you are interested in reading the rest of this article, send an e-mail to: This email address is being protected from spambots. You need JavaScript enabled to view it. or contact Servamus’s offices at tel: (012) 345 4660/22/41. Ed.)