The invisible victims who wear a uniform 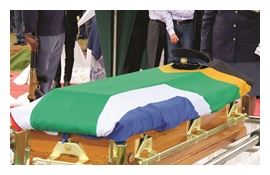 Although police officials are exposed to many dangers on the job, society seldom consider police officials as victims. When looking at the most common definition of a victim, it refers to “a person who experiences crime”. Researchers into victimology, such as Eliasson (2021) argue that being a victim can “expand beyond experiencing a crime and apply to a person who experiences harm”. Research indicates that police officials experience different types of victimisation on the job which can have a direct and indirect physical, mental and economic impact on a police official. As a result of violent and non-violent victimisation in the line of duty, these have negative consequences for their well-being. Despite the fact that they can be victims too, their stories of victimisation are seldom “headlined in the media, placed on political agendas, or discussed in local communities. Due to the lack of inclusion on these platforms, police officials are invisible victims” (Eliasson, 2021).

There is no doubt that there are some police officials who act violently and engage in police brutality. And although there are no excuses for their inappropriate behaviour, one must remember that South Africa is one of the most violent countries in the world, where police officials are under attack daily. According to Gallup, the global polling group, South Africa is ranked the fifth most dangerous country out of 144 countries (Business Tech, 2020). I still remember that many years ago a police official who worked at one of the Gauteng Flying Squads told Servamus that they almost have to duck and dive to avoid flying bullets or endure verbal abuse from community officials on a daily basis.

A large part of police officials' job comprises "dealing with drunks, with the insane, with the dead, with the vice-ridden, with the ill" (Mawby and Zempi, 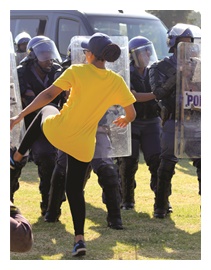 2018). Therefore, it can be said that the police's role is a necessary but "an exceedingly unpleasant and in some sense a degrading one" (Mawby and Zempi, 2018). The policing functions of crime prevention, protecting the public and maintaining public order ensure that police officials are placed in conflict situations in which they encounter hostility, aggression and violence (Emsley, 2014). One such an incident happened on 6 July 2021 when an angry mob swarmed around police after a routine drug bust in the Florida area of Gauteng's West Rand. The police searched a drug house where the occupants kept two pit bull terriers as security. While the police searched the house, one suspect released one of the dogs which attacked one of the police officials. The dog bit the ankle of the police official's protective boot and subsequently gained a vice-like grip on the police official's calf. As the police official's colleagues were unable to free him from the dog's jaws, they were forced to shoot the vicious dog. All this commotion drew the attention of onlookers and those connected to the suspects, who started protesting angrily about the arrest of the suspects. The police called for back-up and several police and private security companies arrived at the scene to disperse the mob. The police arrested the three suspects while the police official who had sustained the dog bite, was transported to hospital (Westerdale, 2021).

[This is an extract of an article published in Servamus: April 2022. If you are interested in reading the rest of the article that discusses the extent of the problem, the reasons for violence against police officials, the types of attacks and whether police officials can be protected against such attacks, send an e-mail to: This email address is being protected from spambots. You need JavaScript enabled to view it. to find out what you need to do. Ed.]