Paying to get a job: Employment scams

In a country where 7.9 million people are unemployed (StatsSA, 2022), it comes as no surprise that many people fall for employment scams. With more than 30% of the adult population desperate to get a job and income, many will do anything to secure a job, even pay for it or provide private information to a complete stranger. Scammers exploit this desperation and are quick to lure victims into their criminal web of deceit.

Job scams are often promoted through advertisements on Facebook and other social media platforms, in well-known classifieds and newspapers, through spam e-mail or on jobseeker - and even government websites (Australian Competition and Consumer Commission, 2021). In January 2022, Nonhlanhla Khoza, the MEC for Social Development in KwaZulu-Natal, warned jobseekers about scammers posing as government officials and selling jobs to unsuspecting members of the public. These scammers were promising jobseekers positions in the Department in exchange for R9000 (SA Government News Agency, 2022).

Job scammers use a variety of techniques to get the jobseekers to pay, ranging from charging “administrative” fees or asking candidates to pay for online “police clearance” certificates. In this article, we will share some of their tactics to act as a warning to those who are desperately seeking employment.

Jobs offered on Facebook and other social media platforms 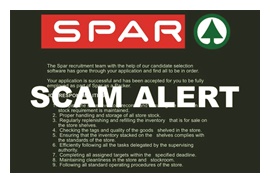 With technology advancing and social media gaining popularity, it has become increasingly easy for scammers to identify desperate jobseekers. It is not uncommon to even see advertisements about vacancies in the SAPS being circulated on social media platforms. One such a scam did its rounds in February 2021 on the Facebook page entitled “SAPS Learnership 2021”. After a message “SAPS is looking for 314 young unemployed”, had been posted on 28 February 2021 on this page, Africa Check had a look into this Facebook page which regularly posts fake job adverts to scam unemployed people. The page used the name of the SAPS while their profile photo consisted of an SAPS application form. It was found that the page had been created on 3 January 2021 under the category “Musician/Band” and was managed by a single person located in South Africa. Within only two weeks after the fake job advertisement had been posted, it had generated more than 1000 likes and 500 shares. The Facebook page informed its users to comment “Help” to get more information, and included a link to where they could “apply”. The link however did not go to the official SAPS website but directed users to a blog page entitled “Local Vacancies Updates”. When Africa Check sent a message to the verified SAPS Facebook page to find out about the job advert, the response was simple: “It is fake, there are no posts at the moment” (Ojuroungbe, 2021).

In June 2022, an advertisement for a job at the City of Tshwane appeared on Facebook. It was posted by a person who claimed to be a manager at Tshwane. The jobseekers were asked to pay R1050 for medical tests and R2000 for a reference number in order to secure the job. The City of Tshwane made it clear that it was a scam and added that vacancies within the municipality are advertised through the job forum which is posted on the official Tshwane website (Masilela, 2022).

[This is an extract of an article published in Servamus: August 2022. If you are interested in reading the rest of the article that discusses how some “employer” requires potential employees to pay to register for a job, or you have to pay to join an online portal, or where you have to share banking details or personal details before you accepted the job, as well as some work-from-home scams and job offers outside South Africa, send an e-mail to: This email address is being protected from spambots. You need JavaScript enabled to view it. or a WhatsApp message to: 078 712 1745 to find out what you need to do to acquire the article. Ed.]