Do not be a victim of a pet scam

Article and photos provided by the National Council of SPCAs 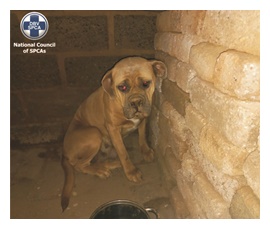 Every year, more and more light is shed on the cruelty behind the breeding industry that is often kept hidden from the public by breeders. Glossy adverts of cute puppies, kittens and other animals are shared on platforms such as Gumtree or Junk Mail. These misleading adverts easily pull the wool over members of the public's eyes - blinding them about the conditions in which the adult animals are kept and where the babies were born. For the purpose of this article, reference is made to dogs in particular, however, the cruelty applies to a variety of animals enslaved in the breeding industry.

In typical breeding industry conditions, such dogs will never experience the freedom and fun of chasing a ball in the park, be taken for walks, or to curl up on the couch next to a loving member of their family. Cats will never know what it is to purr against the hand or leg of a loving human, get to nap in the warmth of the sunbeams streaming through the window or chase feathery toys that jingle as they are being flung in the air.

In simple terms, the animals in the breeding industry will be deprived of the very thing they have been evolved to seek from human companionship. Instead, at best, these animals will be treated like breeding machines, forced to churn out litter after litter of babies - non-stop. At worst? Their lives will be a living hell - forced to eat, sleep and live in cages covered in faeces and urine, left without veterinary care and treatment, confined to chains and cages indefinitely, and denied everything that makes life worth living.

While the breeding industry remains unregulated in South Africa, members of the SPCA organisation are still authorised to conduct inspections at any place where animals are kept. The conditions under which animals are being kept at breeding facilities are often unacceptable with multiple laws being contravened.

In fact, earlier this year, the NSPCA inspected the property of a Pitbull Terrier breeder. The dogs were confined to cages and chains, some of the animals

required urgent veterinary treatment which they had not received until the NSPCA's intervention. The cages were covered in piles of faeces and urine, the water and food bowls were extremely filthy, some of the dogs didn't even have access to clean drinking water and several dogs were displaying concerning symptoms of behavioural issues. This is only the tip of the iceberg in terms of the animal welfare issues that the NSPCA has uncovered behind the breeding industry. In other cases, animals have been found with severe injuries and diseases that were not treated including prolapses, parvovirus, broken teeth and eye issues etc. Some animals have been found with heavily matted fur which is very painful for the animal, overgrown nails, old wounds and scars which are indicative of fighting among the animals, emaciated animals from being overbred and underfed … and so much more. It is not uncommon that when these animals have reached the end of their breeding abilities, they are abandoned or dumped on the streets and left to fend for themselves.

[This is an extract of an article published in Servamus: August 2022. If you are interested in reading the rest of the article, send an e-mail to: This email address is being protected from spambots. You need JavaScript enabled to view it. or a WhatsApp message to: 078 712 1745 to find out what you need to do to acquire the article. Ed.]