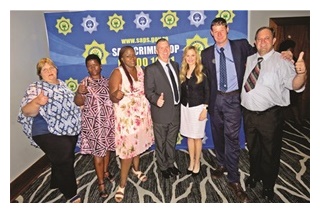 It was a Saturday in January 1996 when nine-year-old Amber Hagerman was snatched off her bicycle in a parking lot of a shopping mall in Texas, in the United States. The only information available at the time was that a blue truck was seen leaving the scene. The question everyone asked was how they were going to find a child with such limited details. Patrol officers were "pulled off the beat" to form part of a special task team to find the missing girl - if they were not on another call, they were actively searching for the little girl. Despite the widespread media coverage which led to national attention that Amber was missing, the police could not find her. Sadly, five days after she had gone missing, a dog walker came across her body floating in a creek a few miles from the place where she had been snatched … her throat had been slit. And, to this day, Amber's case has not been solved (Barber, 2016).

In spite of the tragedy of Amber's death, something positive arose from it in the sense that a community member had phoned a local radio station on the day when Amber's body was found, asking whether broadcasters could join forces with law enforcers to get an alert out in cases where children were abducted. Later that same year, local broadcasters established a coordinated system with local law enforcement agencies which entailed that they could warn the public about a child who had been abducted and was in danger. This system was rolled out nationwide over the years and bears little Amber's name - even though it (also) stands for America's Missing: Broadcast Emergency Response. At the 20th anniversary of Amber's death, her mother said that if it hadn't been for Amber, the AMBER Alert would not have existed (Barber, 2016). 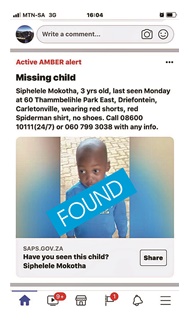 In January 2015, the AMBER Alert project received a technological boost when Facebook announced that it had partnered with the American National Centre for Missing and Exploited Children to send AMBER Alerts to the Facebook community to help find missing children. This means that an AMBER Alert containing details about a child who has been abducted would be delivered to the newsfeed of Facebook users in a targeted search area after the National Centre had issued an alert. Using Facebook to distribute information and photos about missing persons was nothing new, and in some cases, it also resulted in the safe return of that person. Yet, the AMBER Alert went one step further to bring this information to the attention of all those in the targeted area (Vacher, 2015).

AMBER Alert reaches South Africa
On 30 January 2020, the South African Police Service and Facebook officially joined forces to launch AMBER Alert in South Africa. The event was a culmination of a year-long process after Facebook had contacted the SAPS's Bureau for Missing Persons that resorts under the Detectives' Crime Investigation Service to offer the service to South Africa. During the past year, the Bureau for Missing Persons and Facebook ran various background tests to streamline the processes between the two entities before the official launch. In this regard,

Lt-Col Naas Rossouw, the Sub-Section Commander of the Bureau for Missing Persons played a vital role in liaising with Emily Vacher, Facebook's Director of Trust and Safety who is also a former FBI agent and someone who understands the law enforcement environment.

[This is only an extract of an article published in Servamus: March 2020 from pp 37-39. The rest of the article explains how the AMBER Alert works; the public’s responsibility and why partnerships are vital. If you are interested in reading the rest of this comprehensive article, send an e-mail to: This email address is being protected from spambots. You need JavaScript enabled to view it. or contact us at tel: (012) 345 4660 to find out how. Ed.]