Community Policing: When communities form partnerships with the police 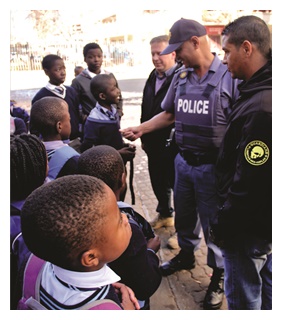 Crime is a global challenge that threatens safety and security within communities, and the peace and stability of the country. As crime compromises the quality of life of ordinary citizens, there is a need for a joint approach by the police and communities. The police have a constitutional mandate to fight crime and ensure the safety and security of the citizens of the country. But, due to the high crime rates that South Africa is experiencing, the SAPS is no longer in a position to combat crime on its own. One of the ways in which the lives of ordinary citizens can be improved is to become involved as communities as active partners in the fight against crime. This means that the fight against crime will be more successful when there is cooperation between the police, communities and other role-players. These include other law enforcement agencies such as the Metro Police Departments and traffic officials, as well as private security companies and local businesses. There is an urgent need for all role-players to form a united front against crime in an attempt to restore law and order in the country.

Globally, community partnerships in policing have been effectively implemented in countries such as the United Kingdom (UK), Australia and The Netherlands. There is no single partnership in policing model that fits all policing environments and policing strategies need to be tailor-made for specific conditions. Police agencies rely on institutional and civil society partners to assist them in dealing with crime as they have come to realise that they are unable to deal with crime without the involvement of the community (Mabunda, 2014). Community policing is a philosophy aimed at achieving more effective crime control, reducing fears of crime, and improved police services through proactive partnerships and programmes with communities. In short, community policing is a partnership between the police and the community to address safety problems (Nkosi-Malobane, 2018).

In an attempt to address the issue of crime in South Africa, the legislature envisaged that Community Police Forums (CPFs) be established at all the police stations in the country to help the police and the community to work jointly to fight crime. CPFs are established in terms of section 19(1) of the South African Police Service (SAPS) Act 68 of 1995 and aim to ensure police accountability, transparency and effectiveness in the community. Another aim of such forums was to bridge the gap between the police and the community and build a harmonious relationship between these groups. A CPF should consist of a group of people from the police and different sectors and interest groups in the community that meet regularly to discuss problems emanating from their communities. Section 4 of the Regulations for Community Policing Forums and Boards in terms of the SAPS Act 68 of 1995 outlines the responsibilities of the CPF as follows:

CPFs are constituted to improve communication between the SAPS and the community, to foster joint problem-solving and cooperation with a view to improving service delivery by the SAPS.

[This is only an extract of an article published in Servamus: November 2020. We also discuss police and community partnerships; reasons why a relationship with communities is important; key components of community policing strategies; success factors in partnership policing and challenges in partnership policing. If you are interested in learning more about community police and want to read the rest of the article, contact Servamus’s offices at tel: (012) 345 4660/41 or send an e-mail to: This email address is being protected from spambots. You need JavaScript enabled to view it.]