Mob justice: Serves no justice at all 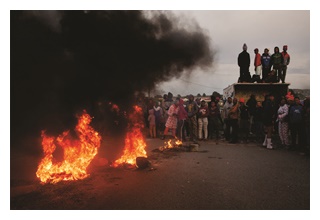 Madoda Magadla, a 50-year-old man from Daveyton, who was accused of stealing a television, was executed by an angry mob who assaulted him in the yard of the family home where the television set allegedly went missing. Eyewitnesses recalled that the assault continued for approximately four hours and that members of the family took part in the beatings. Not only did they use their bare hands to assault Madoda, they also hit him with a sjambok and kicked him. At one stage they poured water over the bleeding man as it apparently intensified the sjambok sting. Later they also poured cold oil over Madoda to intensify the sting.

In an attempt to put an end to his torture, he confessed to the crime. The police eventually came to his rescue and called an ambulance which took him to hospital. Madoda sustained multiple injuries to the head and succumbed to his wounds in hospital (Checkpoint, 2020). Even though the death penalty was abolished in 1995 in South Africa, it is still alive and flourishes in many areas of the country - not at the hands of the State, but at the hands of angry community members who perform mob justice.

Madoda Magadla is one of the mob justice statistics of the country where an average of 58 murders occur each day, of which an average of at least two victims were murdered by their own community members who accused them of criminal acts. According to the South African Police Service’s analysis of the 2019/2020 crime statistics, at least 1202 of the 21 325 murders were linked to mob justice. The true picture is probably much higher because the motives have not yet been established in all the murder cases by the time when the crime statistics were released.

Mob justice is not unique to South Africa. It is deeply rooted in human nature to react as a collective by performing group punishment when people feel wronged. However, since judicial systems have been developed where the principle of innocent until proven guilty is enforced, mob justice is a barbaric solution to solving crime (Damane, 2020). This calls to question why some societies, more than others, still have high cases of mobs taking the law into their own hands.

Communities take the law into their own hands 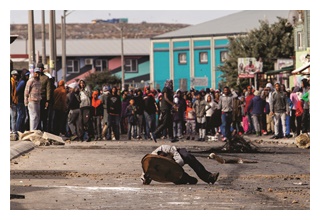 In the majority of cases where people intervene to stop crimes in progress, suspected offenders are caught and handed over to the authorities. The real problem starts when suspects are not only caught, but also punished by communities. The cases on which there are usually reported, are those in which suspects are killed, but there are the "lucky" ones who survive these ordeals. Victims of mob justice are often beaten or stoned to death, but the most notorious method used is "necklacing", where a vehicle tyre is placed around the suspect and he or she is set alight (Lancaster, 2019).

Mob justice is a brutal way of punishing criminals. In April 2018, a severely traumatised man from Wells Estate in Port Elizabeth, who was beaten by an angry mob, escaped after witnessing the gruesome death of three of his friends who were "necklaced". One of the deceased was accused of stealing vehicles. The survivor recalled how community members pounced on the five men in the house where they were sleeping and severely assaulted them. The five men were then forced into the bushes. While the community was placing tyres around their necks, two of the men managed to escape. The other three were doused in fuel and set alight. One of the men managed to crawl away and remove the burning tyre, but he died at the scene from his injuries. He had been stripped naked and his skin, particularly at the back, had partially peeled off as a result of the beating. His hair also appeared to have been burnt. As news of the gruesome murders spread, community members rushed to the murder scene to see the macabre sight for themselves. Although some people were horrified, others made callous jokes. One woman, in reference to the charred remains, said: "Is there anyone with a knife so that I can use it to cut a piece of a biltong?" Another one said: "How will they bury them if they are burnt beyond recognition?" Shockingly, another person answered: "I suspect plastic will be used to bury them" (Mphande, 2018).

All types of mob action run the risk of targeting innocent people who are in the wrong place at the wrong time. In January 2019, 52-year-old Mava Fundakubiwho was 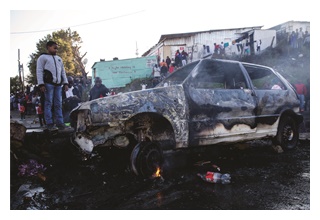 accused of raping a seven-year-old girl in Motherwell outside Port Elizabeth. He was brutally murdered by a mob near his house shortly after the family of the victim claimed that the little girl had been raped by a man who looked like him. The child was taken to hospital for a medical examination which revealed that the girl had not been sexually assaulted. After this incident, Maj-Gen Dawie Rabie, the Motherwell Cluster Commander, warned the community again that mob justice will not be tolerated. “An innocent man was killed by angry residents based on a rumour. They did not even wait to verify the validity of these claims. We are urging our communities to give information of suspected crimes to the police and not to take the law into their own hands. The persons involved were killers and the police and the law will treat them as killers. I am urging our community to identify these killers in order for the law to be enforced and these murderers to be brought before court” (Wilson, 2019). Another innocent victim who was targeted by a mob was Caiphus Nemavhadwa from Mamelodi in Pretoria. On 9 September 2014, he was severely assaulted by a mob who accused him of being a serial murderer following the discovery of three young women’s bodies in the area. He was rescued by the police and spent ten days in hospital due to the injuries he suffered from the assault. But this was not enough to pacify the angry community who set alight his home and torched his two vehicles. Caiphus and his family had to leave Mamelodi in search of a safer area in which to live (Makhetha, 2014).

[This is only an extract of an article published in Servamus: November 2020. The rest of the article discusses reasons why mob justice occurs; whether mob justice is increasing; methods of dealing with mob justice and the prevention of this heinous crime. If you are interested in reading the complete article, contact Servamus’s offices by sending an e-mail to: This email address is being protected from spambots. You need JavaScript enabled to view it. or contacting us at tel: (012) 345 4660/41.]