Terrorism in Southern Africa: Is the threat real to South Africans?

On 11 September this year, the 20th anniversary of one of the most tragic days in American history will be observed. Many of us can remember where we were or what we were doing when we saw the images of two airplanes flying into the Twin Towers in New York on 11 September 2001. It is as if those images are somehow imprinted into our minds, resulting in shock, disgust and goosebumps of how something so abnormal and unimaginable could have happened. The events of that day have changed many lives drastically and resulted in a renewed focus to deal with terrorist organisations that want to intimidate a population or compel a government or an international organisation to do or to abstain from doing any act (UNODC, 2004).

Much closer to home, communities in neighbouring Mozambique have also had life-changing experiences the past few years - with the latest tragic event happening during March 2021. On 11 September 2001, 2739 people died in the USA terror attacks (either as direct victims or subsequently as a result of their injuries sustained on that day) (CDC, 2002). In the northern parts of Mozambique, between 2600 and 2800 people were killed in the armed conflict between October 2017 and March 2021. However, United Nations (UN) refugee agencies estimate that as many as a million people have been displaced due to this armed conflict (GIATOC, 2021), meaning that the impact on and disruption of these community members' lives have been much greater than what happened in Manhattan, New York 20 years ago.

The United Nations Office of Crime and Drugs (UNODC) confirms that in addition to the human cost where lives are lost or permanently altered, terrorists and terror organisations aim to destabilise governments; and undermine economic and social development (UNODC, Nd). In the process, they make sure that people take note of what they stand for and about the extremes they are willing to go to, to achieve these aims.

What is terrorism?
In South Africa, the Protection of Constitutional Democracy against Terrorist and Related Activities (POCDATARA) Act 33 of 2004, which came into operation on 20 May 2005, defines "terrorist activity", as follows:

"(a) any act committed in or outside the Republic, which - 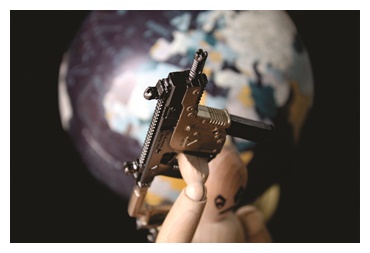 (i) involves the systematic, repeated or arbitrary use of violence by any means or method;

(aa) any dangerous, hazardous, radioactive or harmful substance or organism;

(bb) any toxic chemical; or

(cc) any microbial or other biological agent or toxin;

(iii) endangers the life, or violates the physical integrity or physical freedom of, or causes serious bodily injury to or the death of, any person, or any number of persons;

(v) causes the destruction of or substantial damage to any property, natural resource, or the environmental or cultural heritage, whether public or private;

(aa) a system used for, or by, an electronic system, including an information system;

(bb) a telecommunication service or system;

(dd) a system used for the delivery of essential government services;

(ee) a system used for, or by, an essential public utility or transport provider;

(ff) an essential infrastructure facility; or

(gg) any essential emergency services, such as police, medical or civil defence services;

(vii) causes any major economic loss or extensive destabilisation of an economic system or substantial devastation of the national economy of a country; or

(viii) creates a serious public emergency situation or a general insurrection in the Republic,

whether the harm contemplated in paragraphs (a)(i) to (vii) is or may be suffered in or outside the Republic, and whether the activity referred to in subparagraphs (ii) to (viii) was committed by way of any means or method; and …

[This is only an extract of an article published in Servamus: July 2021. The rest of the article continues to define terrorism; explores how South Africans are involved in and affected by terrorism (involving both local and regional actors); discusses South Africa’s capacity to deal with and investigate terror attacks; and looks at some of the success stories in terror investigations. If you want to find out how you can read the rest of this article, send an e-mail to: This email address is being protected from spambots. You need JavaScript enabled to view it..]