The A-B-C of violence 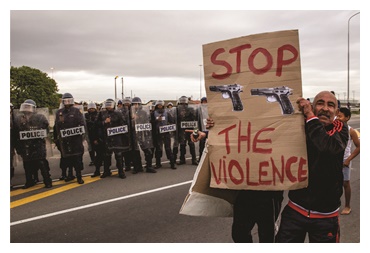 Violence is the one term with which the majority of South Africans are not only familiar, but also an act which many have experienced and/or are still experiencing. The most recent Gallup Law and Order Index, listed South Africa as the fifth most violent country out of 144 countries which were covered in their survey (BusinessTech, 2020), while the Global Peace Index 2020 lists South Africa in position 123 out of 163 countries (IEP, 2020). And sadly, it is hard to disagree with both these indexes as the SAPS's annual crime statistics for the 2019/2020 report period confirm that violent crimes such as murder, assault and sexual offences are on the increase (SAPS, 2020). Our country is plagued by high levels of violent crime which have a negative impact on people's livelihood and our economy.

Violence is a global phenomenon which costs millions of people all over the world their lives every year. Almost 20 years ago, in 2002, the World Health Organisation (WHO) estimated that each year, more than 1.6 million people die worldwide as a result of violence (WHO, 2002a). Almost two decades later this figure must be much higher.

Defining violence
People in different countries have different perceptions of what violence is due to their culture or belief systems. Since violence is such a complex phenomenon, it is difficult to find a clear definition for it, but the WHO defines it as follows: “The intentional use of physical force or power, threatened or actual, against oneself, another person, or against a group or community, that either results in or has a high likelihood of resulting in injury, death, psychological harm, maldevelopment or deprivation” (WHO, 2002a).

Categories and types of violence
The WHO divides violence into three broad categories:

- Family and intimate partner violence includes child abuse and abuse of the elderly; and

- community violence occurs between unrelated individuals and includes random acts of violence and sexual crimes by strangers as well as violence in institutional settings such as schools, workplaces, correctional centres and nursing homes.

SaferSpaces further divides these three categories into four, more specific, types of violence which can occur in each of the previously mentioned broad categories and their subcategories (except for self-directed violence):

- expressive aggression such as humiliating and degrading behaviour;

- coercive control such as limiting access to goods or people;

- threats of physical or sexual violence;

- control of reproductive or sexual health; and

- the exploitation of people’s vulnerability such as immigration status or disability.

[This is only an extract of an article published in Servamus: July 2021. The rest of the article informs us that murder claims more lives than war; looks at the causes and the cost of violence. If you want to find out how you can read the rest of this article, send an e-mail to: This email address is being protected from spambots. You need JavaScript enabled to view it..]