Tracing illegal guns across our borders

Since crime no longer knows borders and many criminals operate across borders, it is not uncommon to hear about the involvement of citizens from our

neighbouring countries in violent crimes, such as cash-in-transit heists. Police need access to every possible tool to help them bring these perpetrators to book which includes the possibility to trace firearms and link them to crime scenes and criminals across international borders.

When the police are able to trace the history and ownership of illegal firearms that they seize or recover during operations or at crime scenes, and compare ballistics evidence of recovered cartridge casings and ammunition, it provides them with valuable information that can be used during their investigations. This information can also link seemingly unrelated crimes not only in one country, but even across many countries.

Firearms recovered from crime scenes do not always provide the incriminating evidence that police hope it would, but they can provide essential clues. This is where the International Criminal Police Organisation, or INTERPOL as they are commonly referred to, steps in as an inter-governmental organisation. INTERPOL has 195 member countries, and helps police across the world to work together to make the world a safer place. This is done by enabling its member countries to share and access data on crimes and criminals, and by offering a range of technical and operational support. This includes providing its member states with tools to identify trafficked firearms and the perpetrators in order to make links to other related crimes. 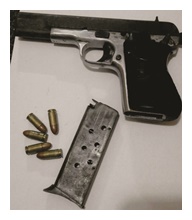 Firearms are often compared to human fingerprints in that every firearm has unique characteristics which are transformed in the form of microscopic scratches and dents to the projectiles and cartridge casings from it (Hill, 2018). The breech mechanism also leaves unique markings on the cartridge case, which are produced by the breech face itself, the firing pin, extractor and ejector. This allows ballistics experts or firearms examiners to examine bullets and cartridge casings to determine whether they had been expelled from the same firearm (ATF, 2016). Firearms can also be identified through their serial numbers (although criminals are known to file these off), their make, model and calibre. In addition to the information that a police agency's internal police ballistics experts can derive from firearms, they often lack information from external sources, especially on whether the firearms have been trafficked from outside the country's borders.

Putting these puzzle pieces together is a complex process, which is why INTERPOL has developed expert tools to guide law enforcement authorities. These tools are:

[This is an extract of an article published in Servamus: July 2022. If you are interested in reading the rest of the article where we elaborate on each of these tools, send an e-mail to: This email address is being protected from spambots. You need JavaScript enabled to view it. or send a WhatsApp message to: 078 712 1745 to find out what you need to do to acquire the article. Ed.]