Gun violence: When firearms land in the wrong hands

“Man shot dead inside Tashas Rosebank while waiting for his order.” - 9 June 2022.

In South Africa, a country plagued by excessively high violent crime rates, it is not uncommon to read these types of headings about how people are shot at randomly, or in targeted killings. With 6083 murders that were committed in South Africa in the first quarter of 2022, from 1 January to 31 March, it is a sad reminder that many people are losing their lives in our country as a result of gun violence. (There was a 22.2% increase in murders compared to the same period in 2021.) (SAPS, 2022b).

Gun violence threatens our right to life and other rights 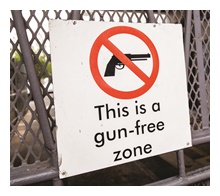 Our right to life is a fundamental right enshrined in section 11 of the Bill of Rights that forms part of the Constitution of the Republic of South Africa, 1996. Gun violence threatens that right - not only locally, but across the world. The term is self-explanatory as it refers to violence committed with the use of firearms, ranging from pistols to shotguns, revolvers to assault rifles or automatic guns (Amnesty International, nd).

According to the Small Arms Survey’s Report on Global Violent Deaths 2017, firearms were used to kill approximately 210 000 people across the world during 2016, of whom 15% died in direct conflict, while 81% were victims of murder. The two regions with the highest proportions of firearm deaths were Latin America and the Caribbean. Mc Evoy and Hideg (2017) further add that firearms were also used in at least half of all lethal violence incidents in several African countries such as Togo, Benin, Cape Verde, Mauritania and Senegal as well as in Albania, Thailand and the United States of America (USA). In countries characterised by the highest levels of lethal violence, 50% of all killings were committed with a firearm, as opposed to about 12% in countries with the lowest rates!

Amnesty International (nd) reminds us that although anyone can be affected by firearm violence, some communities are disproportionally affected, for example those living in gang-ridden communities such as the Cape Flats (refer to the article published from p20 in this issue). The mere presence of firearms can have a negative impact on people's lives as they feel threatened and fear for their lives, resulting in a long-term psychological impact on the individuals as well as the community. Another consequence of living in areas where gun violence is rife, is that it negatively impacts on people’s other rights such as the right to education when children fear being caught in the middle of gun fights between opposing gangs or when schools in such areas close due to ongoing gun violence. Communities located in such areas might even be too afraid to access healthcare facilities as they might fear being caught in the cross paths of gun-wielding criminals. Such facilities might also have to close suddenly as a result of ongoing threats of gun violence in their vicinity, impacting negatively on the community’s right and need to access healthcare services and emergency medical treatment.

It has been widely reported that members of the Emergency Health Services (EMS) in so-called “red zones” fear for their own lives when they are called to emergencies. One of the many incidents happened during the first weekend of April 2022, when EMS officials were stopped in the middle of a road in Philippi on the Cape Flats by four armed hijackers. One of the female officials was hit on her back with a firearm whereafter their service vehicle was stolen. Tshuma (2022) adds that 78 attacks happened on paramedics in the Western Cape during 2021, which is worrying for various reasons, including that it negatively impacts on service delivery to communities and people in need of medical attention.

[This is an extract of an article published in Servamus: July 2022. If you are interested in reading the rest of the article that touches on mass shootings; how easy access to firearms contributes to the horrific situation in South Africa; what can be done to curb gun violence, including the age limit to licensing and police and societal interventions, send an e-mail to: This email address is being protected from spambots. You need JavaScript enabled to view it. or send a WhatsApp message to: 078 712 1745 to find out what you need to do to acquire the article. Ed.]