From legal to illegal - Firearms’ journey to criminality 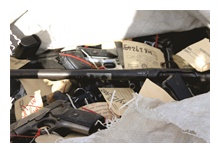 The majority of firearms are legally manufactured - even the ones that were diverted into the illegal pool of firearms in South Africa (Saferspaces, 2016). The United Nations explains the journey of firearms from legal to illegal as that these firearms may pass through “grey” patches where the legal status of a weapon is open to debate. One possibility is when retiring or demobilising soldiers keep their official firearms upon leaving the army, which is legal in some countries.

Unfortunately, an ex-soldier who is unable to find another job may go on to use that once legal firearm to commit an illegal act by robbing a store or selling it to a friend (illegal). In a country such as the USA, a private citizen with no criminal record might buy a firearm from the ex-soldier (legal) or a gun shop (legal), and later sell it at a garage sale to a stranger (legal or illegal, depending on local state or city laws). “The stranger may transfer it to a criminal gang (illegal); or he may simply keep the gun at home (possibly legal), from where it may be stolen by a burglar (illegal), or taken to school by his adolescent son to impress his friends (illegal). The lethal potential of a firearm remains the same, regardless of its legal status” (Peters, 2012).

According to Gun Free South Africa (GFSA), the 2019/2020 national crime statistics confirm that firearms are overwhelmingly the weapon of choice in South Africa to kill, injure, threaten and intimidate. This is evident from an analysis of some of the murder dockets which indicate that 45% of such murders in the country involved the use of a firearm (GFSA, 2020). The legality of these firearms can be questioned. Research conducted in 2017 by the international organisation Small Arms Survey, found that there are an estimated 2.35 million illegal firearms in South Africa (Irish-Qhobosheane, 2021).

USERS OF THE ILLEGAL FIREARM MARKET
The availability of illegal firearms plays a critical role in the operations and modus operandi of organised crime gangs and networks in South Africa. The diverse range of criminal networks that use the illicit firearms market includes gangsters (for example on the Cape Flats), poachers, armed robbers involved in hijackings, house robberies and cash-in-transit (CIT) heists as well as those involved in taxi mafias. Some of these networks engage with this market as consumers while others are dealers (Irish-Qhobosheane, 2021). Although we are not going to discuss each of these users in detail, it was clear that the use of R4s and R5s remained popular for CIT heists during 2019 and 2020, even though the use of AK-47s was increasing. There is a difference between the type of AK-47 used between 2003 and 2006 and those used currently, which are more sophisticated. According to the South African Banking Risk Information Centre (SABRIC), Dashprod and LM rifles are also used in CIT heists. Jenni Irish-Qhobosheane, a senior analyst at the Global Initiative against Transnational Organised Crime (GI-TOC) wrote in a research report entitled “How to silence the guns? Southern Africa’s illegal firearms markets,” that the types of weapons used by CIT criminals provide a useful insight into the possible sources of those firearms. The R4s and R5s, which are police and SANDF-issued weapons, must come from State sources. “Some may have been taken by force from police and army officers, but the trend suggests that police and army employees are complicit in these heists,” she reported. While this provides an indication of the sources of these firearms, the source of the newer AK-47s is not known. However, a crime analyst from SABRIC said during an interview with GI-TOC in 2019 that some of these new AK-47s are believed to be from Zimbabwe. Others claim that these could have been smuggled from Mozambique into South Africa (Irish-Qhobosheane, 2021).

The illegal firearms market is fuelled in a number of ways which include:

[This is an extract of an article published in Servamus: July 2022. If you are interested in reading the rest of the article that elaborates on these former aspects as well as the fact that illegal firearm comes at a cost, tackling firearm smuggling and the reality that legal firearms are being used in crime, send an e-mail to: This email address is being protected from spambots. You need JavaScript enabled to view it. or send a WhatsApp message to: 078 712 1745 to find out what you need to do to acquire the article. Ed.]