Photos by Ashraf Hendricks/GroundUp and Pixabay

Just after 20:00 on Saturday night 21 July 2018, a minibus taxi was travelling down a quiet rural road between the towns of Colenso and Weenen in KwaZulu-Natal when gunmen with automatic weapons opened fire on it. Eleven people were killed and four others critically injured. The victims were all taxi drivers from the Ivory Park Taxi Association, based in Johannesburg who were returning from a colleague’s funeral in KwaZulu-Natal. The taxi in which these 11 men died had more than 250 bullet holes in it (De Greef, 2018 and McCluskey and Yan, 2018). This case is only one of a decades-long battle over taxi routes that has claimed hundreds of lives in South Africa.

The minibus taxi industry is responsible for the transport of almost 70% of South African commuters (Africa Check, 2021). This is no surprise as minibus taxis are the only viable transport option in many parts of the country simply because they cover routes that are not serviced by buses or trains. Despite their value to commuters, these minibus taxis can also be a very dangerous form of transport - in more than one way. As profitability is a vital part for any business owner, it results in many taxi drivers ignoring road rules and making themselves guilty of overloading and speeding which often result in fatal crashes. But the race for profits also costs many people their lives due to the ongoing taxi violence.

According to information published in the 2019 annual report of Transaction Capital, a JSE-listed company which owns SA Taxi, the average short-route operator on the 23 km route between Soweto and Johannesburg can earn a profit of around R25 000 a month. On the 595 km route between Johannesburg to Durban, the average profitability is R37 000 a month (Business Insider, 2020). With these figures in mind, it is clear that the taxi industry is highly competitive. Mark Shaw, the director of the Global Initiative against Transnational Organised Crime (GI-TOC) informs us that the most lucrative routes are long distance ones, such as that between Johannesburg and KwaZulu-Natal. “That’s why there’s so much conflict,” he stressed (De Greef, 2018).

According to Jenni Irish-Qhobosheane, a researcher at the GI-TOC, the number of operators exceeds the demand by far. Along with the surfacing of dominant taxi associations which will do anything possible to protect their own interests and increase their revenues, it has led to high levels of violence within the industry and between operators. This conflict claims the lives of taxi bosses, drivers as well as the lives of innocent commuters (Irish-Qhobosheane, 2021). “Large parts of the industry have begun to look very Mafia-like, where you defend and expand your business turf through the use of violence,” Mark Shaw added (De Greef, 2018). 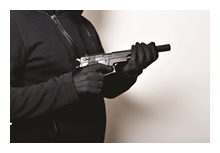 Historically, access to firearms was very limited and many taxi wars involved the use of pangas, knives, axes and other dangerous weapons. In case where firearms were used in taxi conflicts, these were mainly used in targeted hits on opponents. But the situation changed in 1994 when taxi violence became more prevalent. Without proper regulation of the taxi industry, competitors often turn to violence to resolve conflicts. This increased the demand for illegal firearms (Irish-Qhobosheane, 2021).

A pool of illegal firearms
As with all illegal firearms, firearms used in the taxi industry were legal at some stage whereafter they became illegal after they had been lost by or stolen from civilians and law enforcement officers, to name two groups. Sadly, corruption within the SAPS is a contributing factor for the provision of firearms to the taxi industry. Jenni Irish-Qhobosheane (2021) notes that some police members sell their police-issued firearms as well as other firearms seized in the course of their work to industry players.

[This is an extract of an article published in Servamus: July 2022. If you are interested in reading the rest of the article that also discusses hitmen in the taxi industry, private security companies operating within the taxi industry, attacks on buses and dealing with taxi violence, send an e-mail to: This email address is being protected from spambots. You need JavaScript enabled to view it. or send a WhatsApp message to: 078 712 1745 to find out what you need to do to acquire the article. Ed.]