When dogs go to court 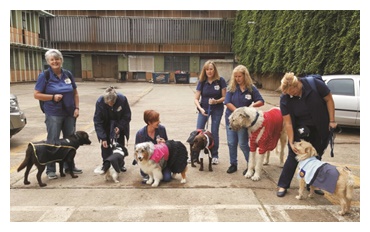 When the eight-year-old victim of Nicolas Ninow (the so-called Dros rapist) was asked to testify in court, social media users were up in arms about the reason why this young victim had to testify. The explanation why she was requested to testify was because her version of events differed from that of the accused and that there had been no eyewitnesses when the crime was committed. Although Ninow pleaded guilty, the court only heard his version during his plea explanation which differed from his young victim's version which she gave to the prosecutor during consultation. The only reasonable way to get to the truth was to call the young victim to testify (Grobler, 2019). Testifying in court is not an easy experience for any person and imagine how difficult and traumatic it must be for a child. Although the victim testified in camera and from a different room via CCTV, it remains a stressful event which can be made easier with the help of a furry friend.

Therapy dogs are used across the world in a variety of environments, such as retirement homes, hospitals and hospices. The reason why they are used is to provide affection, comfort and support to people in these often-threatening settings. The idea of animal-assisted therapy (AAT) was pioneered by Florence Nightingale as far back as 1869 when she discovered that patients of different ages, living in a psychiatric institution, were relieved from anxiety when they were able to spend time with small animals. In the early 1930s, Sigmund Freud, (also known as the father of psychoanalysis) started to advocate AAT when he used his dog, Jofi, during his psychotherapy sessions. He believed that dogs had a special sense and that the dog could signal a patient's tension levels to him. Should the dog remain close by the patient, he or she was thought to be relatively free from tension, but if the dog stayed at the other side of the room, the patient was thought to be very tense. Freud found that many of his patients initially felt more comfortable when they were talking through Jofi. This interaction served as a stepping stone until they felt comfortable enough to speak directly to Freud. Sadly, Freud's view on the therapeutic potential of animals was only recognised decades later (Ernst, 2014).

While recognising the value of therapy dogs in various settings, it has not been utilised in the court setting until recently. In 2003, Jeeter, a golden Labrador retriever, started to make unofficial, 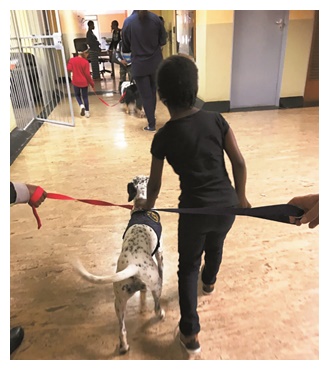 weekly visits to the King County courthouse in California after he had been allowed to be in a courtroom during a trial where two young twin girls refused to testify without his presence (Clarridge, 2005). Canadian courts have been using therapy dogs since 2014 to assist young victims of crime (Child and Youth Advocacy Centres, Nd). Although therapy dogs are not (yet) allowed during trials in South African courtrooms, the Teddy Bear Clinic uses them with great success during court preparations.

When it comes to testifying in court, there are numerous challenges for children such as high levels of anxiety. They are exposed to a foreign environment (the court) where they must tell strangers what has happened to them. The formal court environment and the way the various role-players speak in court can cause the child enormous trauma if the child has to testify. As these children are already traumatised due to the crime they have experienced, they find it even more difficult to articulate themselves under these circumstances.

[This is only an extract of an article published in Servamus: June 2021. The rest of the article discusses the partnership between Top Dogs and the Teddy Bear Clinic; Animal Assisted Activities and scientific benefits; Animal Assisted Therapy and using dogs for court preparations. If you want to find out how you can read the rest of this article, send an e-mail to: This email address is being protected from spambots. You need JavaScript enabled to view it..]