In December 2011, 38-year-old Janice Bronwyn Linden from Durban was executed in China. She was executed three years after she had been arrested on 30 November 2008, following her arrival at the Baiyun International Airport in Guangzhou, without declaring any goods. During the normal search procedure, 3 kg of methamphetamine hydrochloride were found in her luggage. She maintained her innocence and claimed that the drugs had been planted in her suitcase. But her appeal was rejected (BBC, 2011). In June 2016, 34-year-old Tyron Lee Coetzee from the Eastern Cape was arrested at Ho Chi Minh City's Tan Son Nhat Airport, carrying 1.46 kg of cocaine in his luggage. He apparently confessed to Vietnamese investigators that a Nigerian man had contracted him to smuggle cocaine into Ho Chi Minh City from Brazil, via a transfer in Dubai. According to reports, Tyron Lee was offered $3500 (approximately R50 000) to carry the drugs. In August 2018, he was found guilty of smuggling drugs and handed a death sentence in Hanoi, Vietnam (Reuters, 2018). Despite the threat of harsh penalties, it is incomprehensible that people volunteer to become drug mules which makes us question whether they do it out of greed or to make ends meet. However, not all drug mules do so willingly - some are innocent victims who have been tricked into smuggling drugs abroad, without their knowledge. But irrespective of whether or not they volunteered, drug mules are nothing but pawns in the hands of international drug syndicates.

According to Dr Jennifer Fleetwood, a criminologist and sociologist at Goldsmiths, University of London a drug mule is defined as: “… someone who carries drugs across international borders. They typically undertake this specific role only, working under the instructions of others. Mules carry drugs concealed in luggage, on their body or clothes, or swallowed in latex-wrapped capsules in order to avoid detection” (Fleetwood, 2015). Drug mules are human couriers used by drug trafficking syndicates to smuggle drugs (Geldenhuys, 2016). Dr Fleetwood further argues that there is no such thing as a typical drug mule as they may be “teenagers, pensioners, graduates and/or mothers. Some mules are involved due to violent coercion or threats but most are involved due to poverty and financial pressure” (Fleetwood, 2015).

Recruiters are no strangers to drug mules 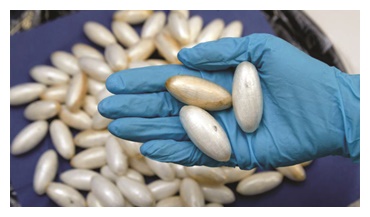 The idiom of “what seems too good to be true, often is”, comes to mind when thinking about the reasons why some people volunteer to become drug mules. People remain susceptible to this form of criminal enterprise in a world where drug cartels operate and recruit in a way that offers them maximum protection, often leaving the drug mule to take the consequences of the entire enterprise (Klein, 2020).

Mules have little or no knowledge of the key players within drug networks because they are recruited by local men and women (Hübschle, 2014) or people they know. In the case of Angela Sanclemente, a former Colombian model, she used female models as drug mules (Penhaul, 2010). In November 2011, Angela was sentenced to six years and eight months’ incarceration for her role in smuggling drugs from South America to Europe (Phillips, 2011).

Another case is that of Vanessa Goosen, a former Miss SA semi-finalist, who was arrested in 1994 in Thailand for drug smuggling. She claimed that she was approached by someone known to the father of her unborn baby to take four engineering books back to South Africa from a friend in Thailand. Little did she know that the books had built-in compartments in the front and back hardcovers and spines in which 1.7 kg of heroin was hidden. This case confirms people's increased vulnerability towards accepting to “carry” something for someone they are acquainted with or trust, rather than a random person with whom they have no ties. This is also what happened in the case of Tessa Beetge who met Sheryl Cwele, wife of the former intelligence minister Siyabonga Cwele, who was her neighbour. Sheryl later offered Tessa an overseas job, but in June 2008 she was arrested in Brazil carrying cocaine worth almost $300 000 (about R2.9 million) in her suitcase (refer to an article published in Servamus: October 2014).

[This is an extract of an article published in Servamus: June 2022. If you are interested in reading the rest of the article that explains the methods of smuggling; the reasons why people turn into drug mules, which includes poverty, job choices and victimisation; how drug mules are detected and South Africans who are locked up abroad, send an e-mail to: This email address is being protected from spambots. You need JavaScript enabled to view it. to find out what you need to do to access the article. Ed.]