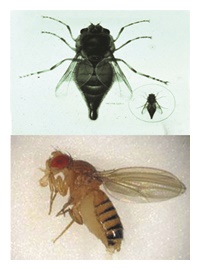 When Albert du Preez Myburgh abducted, sexually assaulted and murdered his close friend's eight-year-old daughter in May 1999, he did not realise that bugs would play a role in his conviction and sentence. He murdered Cindy-Ann Bauer after she had threatened to tell her parents that he had sexually abused her and left her body in an open field. Shortly after her disappearance, Myburgh was charged with her abduction. Seven weeks later, Cindy-Ann's decomposed body was found in the veld and Myburgh was also charged with indecent assault (now sexual assault) and murder. Although he admitted to abducting the girl and "fondling" her, he pleaded not guilty to murder, maintaining that he was in jail when she died.

Myburgh's claim was refuted by evidence presented in court by entomologist Dr Mervyn Mansell, who is regarded by his colleagues to be a pioneer in the field of forensic entomology. He was able to determine the post-mortem interval (PMI) from insect specimens collected from the girl's body. One of the flies, namely the winter blowfly, is unique in that it has a long lifecycle (up to eight weeks) and lays eggs only in the shade. This evidence enabled Dr Mansell to determine the time of death, which happened to correlate with the time the girl went missing. These findings, corroborated with other evidence, resulted in the court convicting Albert du Preez Myburgh of murder and sentencing him to 25 years' incarceration in April 2000. This case has been a perfect example of how the determination of a PMI, through entomological findings, can lead to the conviction of a murderer. The case was the first in South African history where entomological findings were presented in court and used as evidence that aided in the conviction of the suspect (Mail and Guardian, 2000). Since then forensic entomology has been applied to many other criminal and civil cases.

Capt Melanie Pienaar, a forensic entomologist at the Victim Identification Centre (VIC) at the SAPS Forensic Science Laboratory (FSL) told Servamus that investigating a crime is like trying to find pieces of a puzzle. “You will probably never find all the pieces but the more pieces you do find, the more complete the picture becomes. Forensic entomology is a puzzle piece most often not collected. The time of a crime and other elements of a crime can often only be answered by the insect evidence but is completely ignored in the majority of cases. How can we bring full justice to a victim by only doing half a job?” she asked.

With this question in mind, it is important to learn more about the bugs at the crime scene and the role they play in a criminal case. Capt Pienaar explained that forensic entomology refers to any instance where the biology of insects becomes evidence in civil and criminal cases which often must be resolved by legal intervention. It has been categorised into:

[This is only an extract of an article published in Servamus: September 2020. If you are curious about the role that insects play in determining post-mortem intervals, the geography where the victim died, the movement of vehicles and even in poaching incidents as well as the technology that is used for this science, send an e-mail to: This email address is being protected from spambots. You need JavaScript enabled to view it. or contact Servamus’s office at tel: (012) 345 4660/41. Ed.]